Under a grant received by the City of Portland’s Office of Neighborhood Involvement and Office of Management and Finance, Special Appropriations, the Center for Community Engagement announced Portland United Against Hate, a series of 15 workshops offered between February and June 2018.

Free and open to the public, these workshops provided attendees with the information, skills and resources necessary to support their actions in resistance to hate and bias.

Continuing to Resist Hate and Bias

Participant feedback from the 2018 workshops has informed continued CCE programming in the area of hate and bias response and prevention.

CCE has also received additional funding from the City of Portland to offer 4 trainings between May and June 2019 that will prepare attendees from the fields of mental health, education, advocacy as well as the general public, to offer trauma-informed and culturally-responsive support to those reporting acts of hate and bias. 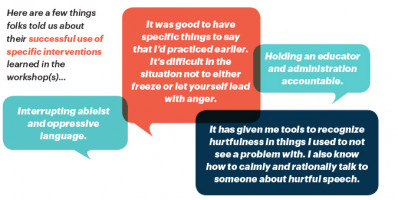 Nearly 300 individuals attended the Center for Community Engagement’s 15 workshops and over 50 people attended more than one workshop. Since our last report, final surveying of CCE workshop participants at 3 months post-workshop is complete. These surveys* were intended to gauge how impactful the workshops were over time, especially if participants encountered situations of hate and/or bias.

View details about our 2018 Portland United Against Hate Workshops.

Speaking Out About Incidents of Hate

PUAH is building a rapid response system that combines reporting and tracking of hateful acts and providing the support and protection our communities need in this uncertain era. Underreporting of hate crimes can create the impression that it’s not a problem. The communities most likely to be targets of hate are also those least likely to report their experiences. PUAH’s tracking tool allows for an anonymous documentation of these experiences.

Please contact the Center for Community Engagement at cce@lclark.edu or 503-768-6040 with any questions.

See all upcoming courses and workshops.