Teacher of the Year

It’s quiz day for Gresham High’s International Baccalaureate Social Studies students. Their teacher, Michael Lindblad M.A.T. ’96, casually moves between desks as the students settle at the start of class, his eyes connecting with theirs. A slight grin etches his face.

“What questions are going to be on the quiz today?” he asks. A murmur percolates among the students. First they want to know how many questions the quiz will have on it. Lindblad grins again.

“Menos de seis,” he says, and when another student translates it out loud for the rest—“less than six”—Lindblad nods.

All good teachers have a method. The great ones continue to hone their methods. They reflect, critique themselves, evolve as times and students change. It’s similar to how a baseball pitcher balances his attention between caring for his arm, studying hitters, and constantly adjusting. The analogy is apt here. Michael Lindblad—Oregon’s 2015 Teacher of the Year—is also the pitching coach for Gresham High’s baseball team.

“You always have to find new ways to engage with students,” he says. “As teachers, we need to move around, say things students don’t expect. Asking students to guess the questions on the quiz sparks conversations. It’s much different than putting a worksheet in front of them.” 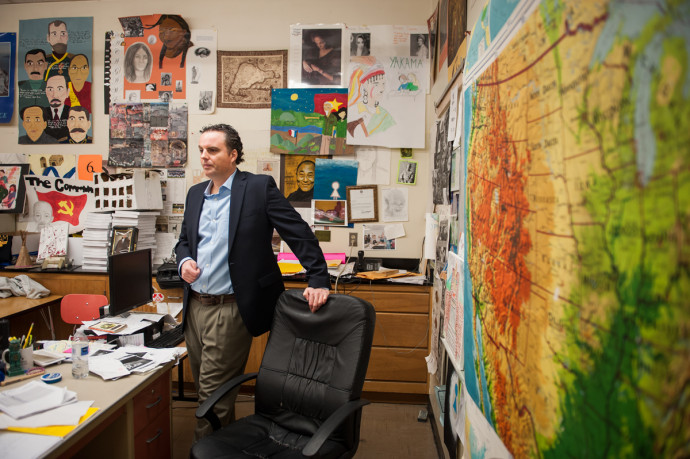 Being able to consistently engage with large, multicultural classes is a skill Lindblad first learned as a master’s student at Lewis & Clark.

“Professor Vern Jones taught a course on classroom management,” Lindblad recalls. “I thought we’d talk about management. Dr. Jones’ focus was on movement and spatial arrangement. He modeled these concepts the entire time, from how the desks were arranged, to how he moved around the class.” (Dr. Jones retired at the end of 2014.)

Finding new ways to engage is paramount when classes consist of 40 students from more than a dozen countries, as is the case during some of Lindblad’s periods. This level of diversity is actually one of the reasons Lindblad chose Gresham High.

“My first school was very homogenized,” he says. “Diversity and equity had been such a huge part of my education at Lewis & Clark, I started to wonder if I was doing everything I could to make a difference.”

He took time away and traveled to Peru in the hopes of immersing himself in a Spanish-speaking culture.

“We intentionally went places where there was no English,” he says. When he returned, he looked at Gresham’s growing Spanish-speaking population and saw an opportunity. “My first year, the school was 3% native Spanish speakers,” he says. “Today we’re 28%.” Lindblad developed Gresham High’s International Baccalaureate history program, and then advocated for intensive outreach to recruit more students of color into the course.

As Teacher of the Year, Lindblad will have even more opportunities to advocate for students. He will serve as a spokesperson and representative for all Oregon teachers and will travel to Washington, D.C. in April with teachers of the year from other states. There, he will talk about education policy with national leaders, including President Barack Obama and U.S. Secretary of Education Arne Duncan.

As the class continues, Lindblad’s students break into groups to discuss the reading assignment: the first chapter of The Communist Manifesto. “Some people say you can’t teach The Communist Manifesto to high school juniors,” Lindblad says. “They think the vocabulary is too big. For me, I’m more interested in how students engage with the work.”

At the blackboard, volunteers compose their questions. Then Lindblad assumes the role of curator—reading questions aloud, inviting responses, making sure as many students as possible lend their voices to the conversation. It looks less like teaching and more like a community forum. For Lindblad, it points back to method and process. In fact, the power of process is another central lesson he first learned at Lewis & Clark.

“The day our cohort was supposed to model our teaching presentation, we were completely unprepared,” he says. “Our professor kicked us out and told us don’t come back unprepared again. She literally said, ‘We’re trying to turn out the best teachers in Oregon!’ I knew if I didn’t shape up I was in trouble.”

Another professor emeritus, Zaher Wahab, was instrumental in framing Lindblad’s thoughts around equity and respect in the classroom.

“Professor Wahab drove home how important equity is to Lewis & Clark’s mission. In our very first class on race and equity, he challenged everyone’s opinion, and effectively cracked our minds open.”

It’s ten minutes before the end of class and Lindblad circles back to the quiz. His students are about to find out if their guesses about it were correct. He asks a few questions related to the Manifesto. But for his last question, he moves away from Communism.

“Recall the terrorist attack at the French paper last week,” he says. “What do you think will be on the cover of this week’s issue?”

The students look around, snap their fingers as if they’d just heard but can’t remember.

“It’s vital to continually reference their world,” Lindblad says, “When you can bring in an in-the-moment example that they’re living through, they stay connected and focused in a broader way.”

When Lindblad was just a few years older than his students are now, his mother voiced concern about his own narrow focus.

“At the time, all I thought about was baseball and my GPA,” he says.

At her urging, Lindblad spent a semester studying abroad in Great Britain. While there, he traveled through Europe, and then visited Tunisia.

“I was completely unprepared,” he says. “I thought I could travel through the desert in shorts and a T-shirt, for instance.”

While there, he ate dinner in a house that lacked electricity, and was half the size of his current classroom. He came away with a greater understanding of what it means to be a global citizen, along with a desire to help others discover the same thing.

Shortly after coming to Gresham High, he developed an annual humanitarian project designed to inspire and help students feel connected to real-world issues. Each year, his classes lead fundraising efforts to support a range of causes—from local shelters to international relief and education.

“The humanitarian project takes learning beyond the classroom,” he says. “Students go out into the community, and reach out far beyond the city limits. They see that when they engage with the world, they have the power to change things for the better.”

Michael Lindblad is the 13th Lewis & Clark alumnus to be named a Teacher of the Year. Read about other alumni success stories on our Alumni page.