On Saturday June 28 a group of counselors, educators, graduate students, sustainability professionals and community members convened at Lewis & Clark for Nature Health Access, a workshop that examined the following questions: Are there issues regarding access to healthy natural spaces in our community? How can we determine needs and solutions?

The workshop reviewed some of the latest findings regarding the health benefits of green spaces and near-by nature and how these benefits are unevenly distributed in our community.

This workshop was co-sponsored by the African American Outdoor Association, Friends of Trees, Legacy Hospital Healing Garden Program, and the Ecopsychology Certificate program, the Center for Community Engagement, and the Graduate Students of Color Alliance at the Lewis & Clark Graduate School of Education and Counseling. 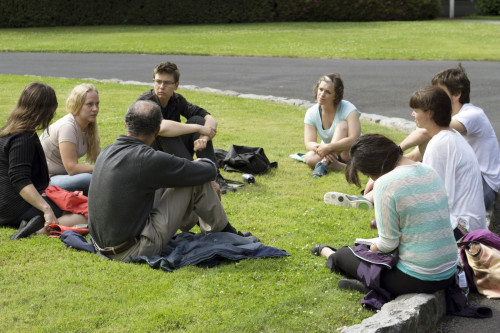 Lewis & Clark graduate students met again on Sunday had the following feedback to share about the impact the weekend had on them:

“One of the biggest takeaways for me was the research presented by Geoff Donovan on the health benefits of living under tree canopy and the detriments of when the tress around us get cut down. I think it’s brilliant how he’s been able to quantify these benefits and detriments and am glad that there is research being done that supports the need for green spaces.”

“On the day following the workshop, we took a field trip to attempt to put into context and visualize some of the topics and places covered in Saturday’s presentations and forums. It was out in the field that the interplay between the previous days presenters began to coalesce for me. The research Mr. Donavan presented regarding the effects of green space on infant birth-rate, and the ability for trees to mitigate the presence of toxic particulates found in areas abutting major thoroughfares, dovetailed elegantly with the expansive tree-planting campaigns described by Friends of Trees’ Erica Timm.  The community engagement and coalition building described by Ms. Timm overlapped with Gregory Wolley’s efforts to and emphasis on the importance of addressing social justice issues in environmental realms, especially in a city with as checkered a past in these matters as Portland. The efforts, goals, and concerns of a wide and diverse group of actors, it became clear to me, were deeply interwoven.  In this sense, I saw a metaphor for the natural environment itself.  And I found this deeply encouraging.”

“Since seeing the presentation of [Geoff Donovan’s] data on air pollution and trees, I am much more aware of green space as I move about the city, particularly when I am driving.  Even yesterday as I drove through several different neighborhoods of differing socioeconomic status, I noticed the difference in green space.  In the wealthier neighborhoods, streets were tree-lined and there was more green space. In lower income, traditionally immigrant neighborhoods, there was less green space and more concrete.  I wondered if there were any differences in health status for folks living in the different neighborhoods.  I also wondered if Donovan’s study could be replicated in Canada.”