Joanne Mulcahy has travelled to explore Michoacán, Mexico many times in the last two decades. But this spring, as a member of the Fulbright U.S. Scholars Program, Mulcahy is officially representing American scholarship abroad.

Mulcahy teaches and writes creative nonfiction, including memoir, personal essays, biography, and ethnography, with a focus on women’s lives. She is the co-founder and co-director of Lewis & Clark’s Documentary Studies Certificate Program.

For the Fulbright assignment, Mulcahy is teaching creative nonfiction at La Universidad Latina de América (UNLA) in a course called “Telling Lives: Reading, Recording, and Writing Life Stories.” The course immerses students in Mexican and U.S. nonfiction and then engages them in conducting fieldwork at a rural health care project in the nearby Lake Patzcuaro region. Students write profiles that illuminate the ordinary lives of Mexicans.

Is “creative nonfiction” different in Mexico than in the United States?

Read an excerpt of “Stories from Michoacán”, by Joanne Mulcahy

Ilan Stavans, a Mexican-born writer and editor of The Oxford Book of Latin American Essays, says that in Mexico, “genres … often erase their differences, or at least exist in a promiscuous state.” The fact/fiction divide is also less firm. This isn’t to say that nonfiction writers don’t care about facts, or truth, or the realities on which their work rests. But we can’t assume that “nonfiction” means exactly the same thing on both sides of the border. As Beth Jorgensen points out in Documents in Crisis, a study of Mexican nonfiction, the term no ficción rarely appears in book reviews, journals, or bookstores. Instead, you might see phrases such as una historia verdadera (a true story) or base documental (documentary basis) and similar phrases. Nevertheless, the umbrella for nonfiction in both cultures is huge, and there is a great deal of shared terrain.

How has your work at Lewis & Clark informed your teaching in Michoacán? 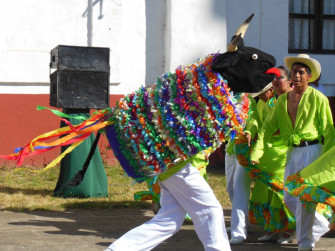 We wandered for an hour, frustrated the way gringos can be when there seems to be no schedule. Suddenly we spotted our first torito outside a house, the bull’s head shining in the late afternoon sun. Then a pair of legs appeared beneath the bull and hoisted it into the air. Horns sounded as a band of men in blue shirts strolled toward us. The torito was up, lurching and tilting its way, the cheering crowd close behind. Joanne MulcahyExcerpt from Stories from Michoacán

My teaching tools in Mexico are similar to those I use in the United States: seminar-style discussion, writing in response to class readings, freewriting as a basis for essays, and a writing workshop model—writing together, responding to one another’s work, and then revising. Friends on both sides of the border warned me that this approach might not work in Mexico. “People are too guarded. They won’t reveal themselves,” one person said. To my surprise and delight, students took to the writing workshop very quickly. Students also learn to use documentary tools such as interviewing, transcribing, analyzing the transcripts, and writing portraits of the people we interview.

What insights or skills do you hope to bring back to Lewis & Clark?

I’d like to examine the questions my students here have posed about truth, facts, and the boundaries of imaginative writing.

The crónica is an interesting example—a hybrid form that exists between high and low culture, fact and fiction, documentation and invention, everyday news journalism and literature. The form is popular all over Latin America. Crónicas often appear in daily newspapers but are written by acknowledged writers with strong attention to literary form. I read crónicas daily in Mexico City newspapers on topics such as the disappearance of old movie theaters, or the lives of bartenders or women workers at the airport. But you might also find a description of an imagined gathering of dead literary figures in a cantina in Mexico City. Lives in the margins, especially in urban settings, figure prominently. Many cronistas challenge official versions of history, often in response to traumatic events.

What Mexican cultural dynamics are you most interested in?

The temptation in a place like Mexico is to focus on the “purity” of indigenous cultures, which are rich and varied and heavily promoted by the tourist industry. But my understanding of culture is that it is a dynamic, hybridized, evolving force that animates and shapes all of our lives. Mexico is drenched in those parts of culture that most interest me—ritual and symbol—but those are traditional and contemporary, sacred and secular. I’ve been to a dozen different religious rituals that blend elements of indigenous practices with Catholicism. But I’m also intrigued by secular ritual, including the yoga class I attend several times a week, the posturing of political figures, and everyday practices such as the acceptable time of arrival just about everywhere: late. Being in another culture makes me alive to things I might ignore at home—an obvious truth for all of us. That’s why we travel and live in other cultures.

What are you writing about while you are in Mexico?

I hope to look at a diverse range of women’s lives, among them urban dwellers in Morelia, women mural painters, and U.S. expats who’ve lived here for many years. I’ve been writing varied essays since I arrived and short pieces for my blog: “Stories from Michoacán.” Some deal with rituals and cultural symbols, others with immigration, especially how the latter affects the lives of people in Michoacán. This feels especially important since so many people who migrate from this region become our neighbors in Oregon. But I also hope to write more about daily life here. Mexico is a rapidly changing country with a growing economy and middle class, huge shopping malls and cineplexes as well as women in huipiles and rebozos in the villages. It’s this mix of tradition and modernity that interests me a great deal.