When Roosevelt High School, one of Oregon’s lowest performing schools, won a three-year federal School Improvement Grant (SIG), officials saw an opportunity to set a new course for its students. To help catalyze the momentum, they recruited Angela Nusom Ed.D. ’11, who had built a model early college access and advocacy program at Centennial Learning Center, an alternative high school in East Portland.

“When I first arrived, it was clear that Roosevelt had a plethora of services in place, but was still one of the state’s lowest achieving schools. I needed to understand why things weren’t clicking.”

Beyond college ready and career focused

Nusom quickly determined that she wanted to see improvement in the way families were engaged in issues related to transitioning out of high school and into the world of college, employment, and independent living.

“It’s absolutely essential for families to be engaged every step of the way. Many don’t feel they have a place within school systems. This is especially true for families that haven’t gone through the college experience themselves.” 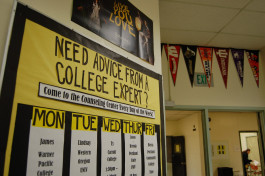 To fulfill the critical needs associated with family engagement, Nusom looked to her long-standing relationship with Lewis & Clark’s graduate school, where she received her doctorate. At Lewis & Clark, Nusom has worked extensively with an interesting ally—not a professor of education, but a faculty member in the Marriage, Couple, and Family Therapy program, Andraé Brown. (Brown collaborated extensively with Nusom as she was building the college access program at Centennial.)

“We see families being the primary system that we’re all a part of. When you work with families, you’re also working with schools and communities. Access to young people provides you an opportunity to support families, and see how all the systems interplay and intersect. If you can manage home life issues, dating and partnerships issues, etc., it will help students be more successful academically.”

Sharing Brown’s vision, Nusom also understands the power of the reciprocal relationship between Roosevelt and Lewis & Clark. “My students and their families get the services they need, and his graduate students—counselors in training—get an amazing opportunity to practice therapy in action within a non-traditional environment.”

I’m working with families, couples, individuals, and relational groups in a very atypical setting, supporting them on everything from daily stresses and worries to coping with new family dynamics.Irina KolobovaM.A. in Marriage, Couple, and Family Therapy ‘13

“Rarely does it look like people coming to see me in an office,” says Irina Kolobova, one of two Lewis & Clark counseling students working at Roosevelt during 2012/13. “We have the flexibility to visit families in their homes, have sessions on the bus…I’ve even had casual hallway conversations turn into hour-long group sessions that delve into family issues, independence, and what it means to lose then regain personal power.”

With graduate students in place, Roosevelt’s students and families have access to proactive support that goes well beyond completing the typical college to-do list—completing applications, filling out the FAFSA, requesting a letter of recommendation, etc. As Nusom explains, students and families who actively participate are gaining entirely new perspectives on what therapy is, and what college transition support can look like.

A new view of what therapy is

At Roosevelt, Kolobova and her classmate Allegra Warren are engaged in an approach to therapy labeled the “cultural context model,” which is embedded in the Marriage, Couple, and Family Therapy program’s philosophy. It emphasizes community, critical consciousness, empowerment, and accountability.

Nusom explains that this approach in action is inherently flexible. At Roosevelt, it encompasses everything from creating summer enrichment programs on college campuses, where students explore the meaning of education in their lives; one-on-one therapy in which they discuss feelings of sadness, anxiety, or fear related to going to college; and living-room conversations with extended relatives about the challenges and excitement of growing older and experiencing more independence. At the root of the approach is its emphasis on student and family strengths, as opposed to weaknesses or challenges.

Kolobova and Warren split a caseload of more than 160 students, and receive weekly supervision from Brown and Nusom.

Lewis & Clark has prepared me for this thanks to the amount of time we’ve spent talking about cultural competencies, and I’ve been able to apply those skills on a daily basis.Irina KolobovaM.A. in Marriage, Couple, and Family Therapy ‘13

According to Kolobova, the non-traditional aspect of practicing at Roosevelt played a key role in her decision to apply. “When I think of a clinical internship, I picture a mental health clinic where people go for services. Roosevelt is definitely not that kind of environment.”

“Senior year is a significant life milestone, especially for families that have never experienced it,” says Nusom. “That’s our point of entry, but the work goes well beyond college access and career readiness. Once we begin working with students and families, there’s no limit to the support we can provide.”

In coming years, Nusom intends to double the number of interns to four, with each having the same opportunity as Kolobova and Warren—to employ their skills and understanding of the cultural context model in a proactive, non-clinical environment.

“The engagement at Roosevelt exists way outside of the box, and Angela encourages us to work that way. There’s more freedom here to make therapy look however it needs to look in order to support students and families.” 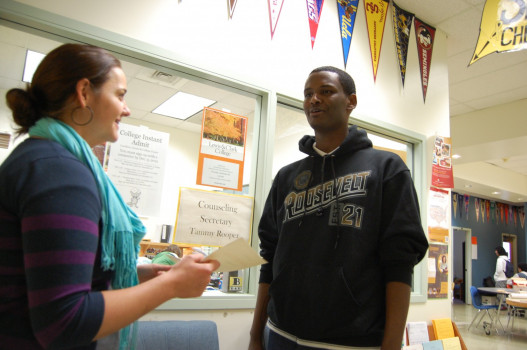 Learn more about the Marriage, Couple, and Family Therapy Program