Elena Garcia-Velasco M.A.T. ’97, a transformative Spanish educator, is Oregon’s Teacher of the Year.

“If I am the teacher of the year, then you are the students of the year.”

The packed auditorium erupted in cheers and applause.

The veteran Roosevelt High School language arts teacher had no idea she’d won the state’s highest teaching honor until her name was announced at a surprise assembly.

At first, she appeared stunned and uncomfortable. She dislikes talking in front of large groups and she hadn’t prepared a speech. However, as she surveyed the audience, composed largely of low-income minority students with fledgling college ambitions, she knew this was an opportunity to build their confidence—something she’s known for.

“This isn’t about teachers,” she told the students. “This is about you. We believe in you. We want you to have a good life. It is truly an honor that every single day I get to work with you and help you reach your potential—at the fastest pace possible.” Then, displaying her characteristic no-nonsense work ethic, she added, “Now let’s get back to class and get to work.” 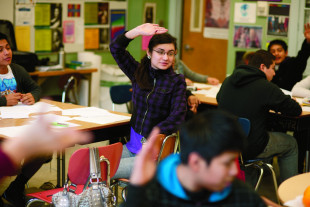 When she was nominated and first approached about filling out the paperwork to be considered for the Teacher of the Year Award, Garcia-Velasco was hesitant. “I don’t like a lot of attention,” says the 15-year teaching expert. “I didn’t want the notoriety. But when they asked me, I thought, how can I ask my students to step up and extend themselves if I’m not willing to do it?”

Now she’s turned the honor into an opportunity to bolster her students’ often tenuous self-esteem. “I start every day by telling them, ‘You’re the students of the year’ and they love it.”

Her student-focused approach to teaching works. An astounding number of her students, mostly Spanish-speaking Latinos and Chicanos who never dreamed of going to college, pursue degrees in higher education. Garcia-Velasco transforms students with poor literacy in their first language and little interest in higher education into serious, high-achieving learners who challenge cultural norms and graduate from college.

Garcia-Velasco traces her student-oriented approach directly to Lewis & Clark’s M.A.T. program. “On the very first day at Lewis & Clark, they told us we were agents of change, and it stuck with me. The philosophy of the professors at Lewis & Clark —that we can make a real difference in the lives of students—is very powerful. I’ve spent all these years thinking about that and putting it to work.” 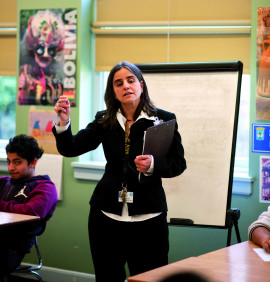 After Garcia-Velasco earned a master’s degree in teaching from the graduate school, she received job offers in white suburban schools but didn’t take them. She wanted to work in Portland at an inner city school with culturally diverse students. “My friends thought I was crazy,” she says smiling. “But I knew something would open up.”

It did at Jefferson High School, where her first job as a Spanish teacher was an eye-opener. “I met my first Latino students, and I assumed they could read and write in Spanish. They couldn’t. The literacy piece was missing.”

Garcia-Velasco, who was born and raised in Spain, hails from a family in which everyone is expected to graduate from college. When she discovered that Latino students in America often don’t finish high school —let alone consider going to college— she knew she’d found her calling.

“When literacy is missing in students’ first language, it affects their literacy in other languages like English,” she explains. “These are students whose parents haven’t had an opportunity to go to school. The Spanish they speak at home is conversational. My job as a teacher is to level the educational playing field for these kids by helping them with their Spanish literacy.”

When literacy is missing in students’ first language, it affects their literacy in other languages like English.

Garcia-Velasco understands firsthand the obstacles her students face. When she came to the United States, she didn’t speak a word of English. She knows that immersion is the only way to become truly fluent and literate in another language.

As a second-year teacher, she took a job at Roosevelt High School teaching Spanish as a second language and, over several years, built the Spanish language arts program from the ground up. Fifteen years later, Garcia-Velasco teaches all four levels of Spanish, culminating in advanced placement classes, rigorous courses that require students to analyze classic Spanish poetry and literature.

She’s the kind of teacher who has high expectations for her students—and it makes all the difference in their lives. “Students often send me cards and letters saying, ‘Thank you for believing in me, for pushing me, and for not giving up on me,’” she says softly.

Twenty-five ninth graders, mostly Latino, file into Garcia-Velasco’s classroom. This is an all-Spanish class; no English is allowed. It’s this kind of immersion, she says, that challenges them to up their Spanish literacy. When one of the students asks her a question in English, she responds with, “En español, por favor.”

The students sit at small tables in groups of five or six. The room is large with a radiator that works overtime and big windows overlooking a courtyard. The walls are covered with slogans like “Respect our differences” and travel posters from Mexico, Guatemala, El Salvador, Honduras, Cuba, and Costa Rica—where many of the students or their ancestors come from. On one wall are the educational targets for the day’s lesson: think critically about the themes in a movie and formulate essential, deep questions related to the movie’s themes from articles you read. These are lofty goals, especially for students who aren’t used to being challenged by high expectations.

Today, the students are discussing Real Women Have Curves, a film about a young Latino woman in East Los Angeles, torn between accepting a scholarship to a university and following her mother’s wishes to help support the family by working in a sewing factory. It’s a film that challenges gender stereotypes and raises difficult cultural questions.

“Why does Ana’s mother not want her to go to the university?” asks Garcia-Velasco in Spanish. “What are the larger questions here?”

As she churns from table to table, she is a whirling dervish, always moving, encouraging, prodding, answering questions. When a group gets too excited and tumbles into extraneous conversation, she gently but firmly draws them back. “You’re very intelligent,” she tells them. “We’re looking for intelligent conversation.” 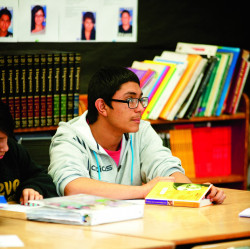 The questions her students come up with are difficult and thought provoking: Why do some parents not support their children going to college? Why is it easier for white people to go to college than Latinos? How does money affect people’s education? Why are jobs that require more physical effort valued less and paid least? What does it mean to be a “good” son or daughter? What is true beauty? Are you planning on going to college? Why or why not?

Garcia-Velasco smiles frequently. This is a woman doing what she loves, and it shows. When she momentarily fumbles with the SmartBoard that was part of her Teacher of the Year prize, the students tease her and she laughs good-naturedly at herself. “I’m still learning,” she tells them.

When she finds many of the students haven’t done the required homework assignment, she simply gives them time to catch up in class by having those who’ve done the homework lead the discussion. There’s nothing punitive; there’s no criticism. “If I get mad, we can’t move on. If I do that, I can’t reach them.”

“Are you going to college?” one of the students asks his group.

A young girl in a red sweatshirt and tight jeans, stares intently at her fingernail polish, not speaking. A young boy with spiky brown hair tells her, “You’d better.” When one of the students asks Garcia-Velasco a question, she doesn’t spoon-feed him the answer. Instead, she encourages him to ask his group. “Women in the past were taught to be housewives and not get educated. Is it because of the parents or because of men?”

The question sets off a heated debate that even engages the previously taciturn girl.

After class, a steady stream of students seeking extra help comes through Garcia-Velasco’s door. Parents sometimes stop by after work at 5 or even 6 p.m. A 12-hour day is typical, and she often doesn’t get home until after 8 p.m. She tries not to work on Saturdays, except the one Saturday a month when she does. “I haven’t found a balance with work and home,” she admits. “I’m always working in my head even when I’m not here.”

Her commitment is getting results. Nearly 100 percent of students in her AP Spanish Literature class go on to college.

She insists the long hours are necessary because the stakes are high. “I know for a fact if students’ literacy is better, they’ll have a better life. They’ll be less likely to get abused. This is important.”

This kind of intensive teaching takes time. For her, there’s no canned curriculum or lessons she used the year before. She custom-designs curriculum for each class. “I have to adapt to whatever group I have. I have to really think about how to meet them where they’re at.”

Her commitment is getting results. Nearly 100 percent of students in her AP Spanish Literature class go on to college. Of the 50 Oregon students statewide who took the AP Spanish Literature exam in May 2010, 12 of them were Garcia-Velasco’s students and 75 percent of them passed (the national average is 60 percent). Roosevelt High School students garnered $4 million in college scholarships last year. One of them was Angel Gutierrez, one of Garcia-Velasco’s students, who was awarded a full scholarship to Brown University.

“I get to work with students for years, so I get to see results,” she says. “I see the growth, and it keeps me going. We really are agents of transformation.”