In 1988, Kim Stafford’s brother Bret took his own life. The brothers shared a bright, exploratory childhood together, but grew more distant as adults. When Bret killed himself it was as if an iron door had swung shut on his story, and the Stafford family expressed its grief and love for one another in a protective silence. Kim Stafford’s new memoir, 100 Tricks Every Boy Can Do: How My Brother Disappeared, opens the iron door and works backward through the mystery of Bret’s sadness to his happy boyhood.  Writing the book, according to Stafford, was a project to “make my brother’s life a whole story again, not just a dark event.”

Lewis & Clark: Bret died 24 years ago; why did you write this book now?

Kim Stafford: It took me a long time to realize this didn’t have to be a big book about an impossibly weighty topic—it could be 100 little stories, in bite-sized pieces. This is the same way we teach. We teach many little lessons; there’s not one big lesson and then you’re educated.

There’s not one golden 10-minute session with a counselor and you suddenly understand. Learning is an incremental process.

Now that the book is finished and you’ve told Bret’s story, do you feel different than when you began?

I say in writing class that a lot of the magic of writing is the trick of beginning. Starting to tell the story is an act of forgiveness.  A friend said we spend the majority of our energy not saying what we want to say, and not doing what we want to do. We keep the lid on. Part of the release in writing is you’re not at war with yourself anymore. I owe much to my wife, who said, “Go find solitude, and don’t come back until you’ve started writing.”

There was an episode when I was in Bhutan, at a monastery in a very remote place called the Tiger’s Nest. In a room people were lighting butter lamps to remember their dear ones. I thought, “I’ll light a lamp for my brother.” The moment I lit the wick, I was weeping. There was a hissing noise as my tears fell into the flame.  I saw a sentence: “Why-did-you-have-to-go?” Each word seemed like a mountain peak, and it seemed easier to move the mountains than to change that chain of words. But then somehow came another sentence, “You-had-to-go.” I I felt I’d put down a big stone I’d been carrying. 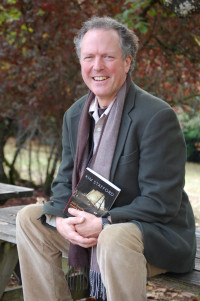 You clearly inherited your father’s legacy as a writer and professor (even working at the same college as he did). Can you talk about that legacy, and what it’s like to be the younger brother of such an elder?

That my brother was a happy child just intensifies the mystery of his later life. His sadness was a mystery to him and even deeper mystery to the rest of us.

It was mysterious to me when I grew taller than my older brother, and when I succeeded at things he struggled with. It seemed out of kilter with the way the universe should be. When we were in the same math class in high school, I went to our teacher and said we had to get the same grade. If I got a better grade than my brother, it would be wrong.

We grew up right outside here [on the campus of Lewis & Clark]. We lived in a house across the hedgerow there. Our dad had a contract with a “rights to fruit” with the college—we would come here and pick the apples, plums, grapes from the old estate. The college was our domain as kids. I inherited that part of our father’s identity, and my brother did not. One of the most devastating things I learned while I was writing the book was the story of a conversation my father had with a friend. “I love all my children,” our father said, “but there is one who is myself, and that’s Kim.” My brother must have known that. I suspect that was very painful for him. 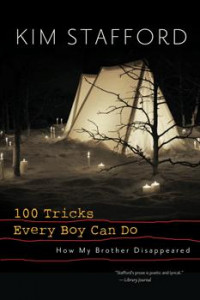 You teach writing at Lewis & Clark in a program that is tucked in among master’s programs for teachers and counselors. How is the story of your brother connected to that work?

I started out thinking I was writing this book for my family, but I think it’s for anyone who has been through darkness. By writing this book, my eyes were opened to other people’s suffering. There’s a certain etiquette in many families to not tell what hurts. One kind of love is to protect each other from the difficult dimensions of life. When I started to write this story, the other kind of love became apparent—when you talk about sadness it becomes more a feeling of “we’re in this together.” That sentiment is what education and counseling are for: we share difficult but important work of learning.

I have been privy as a teacher to some moments when a class has made a collective decision to tell the truth. They decide for mysterious reasons, “This is a safe place to tell things I’ve carried for too long.” That kind of truth-telling and courageous exploration is something I’ve been privileged to see now and then.

What response have you received about the book so far?

It’s the kind of story you don’t want to inflict on someone else, but when you meet someone who welcomes that dimension of life, we can tell each other amazing things. Even while I was writing the book, many people said to me: “I had a brother, too,” or “That was my dad,” or “My best friend, that’s what happened to him.” There’s a hidden a language with people who know grief. We have a dialect. 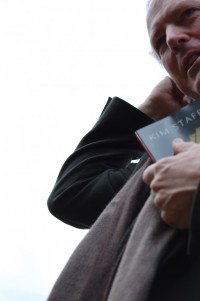 Can you talk a bit about how you wrote the book?

I spent long days writing the table of contents, naming memories and episodes that were not yet written. There are 88 of these fragments in the book. The thing I like about the very short chapter is that it doesn’t have to make a big claim, or sum things up. It’s an episode that has remained in memory for reasons of its own. As I tell these one by one, they gather toward a greater meaning.

What did you learn about yourself as a writer in the process of creating this book?

When I started writing, I thought I would remember things and write them down. But it doesn’t work that way. By writing, you learn how to remember. You start writing, and then you recall, “Wait a minute—that other thing happened next.” I love a quote from Norman McLean about this: “Thinking consists of noticing something visible…which leads you to notice something else visible…which leads you to notice something that’s not visible.” Thinking is not a passive activity.

Learn more about Kim Stafford and the Northwest Writing Institute.
Listen to an interview with Kim on OPB’s Think Out Loud, or read a synopsis of the book from the Oregonian.